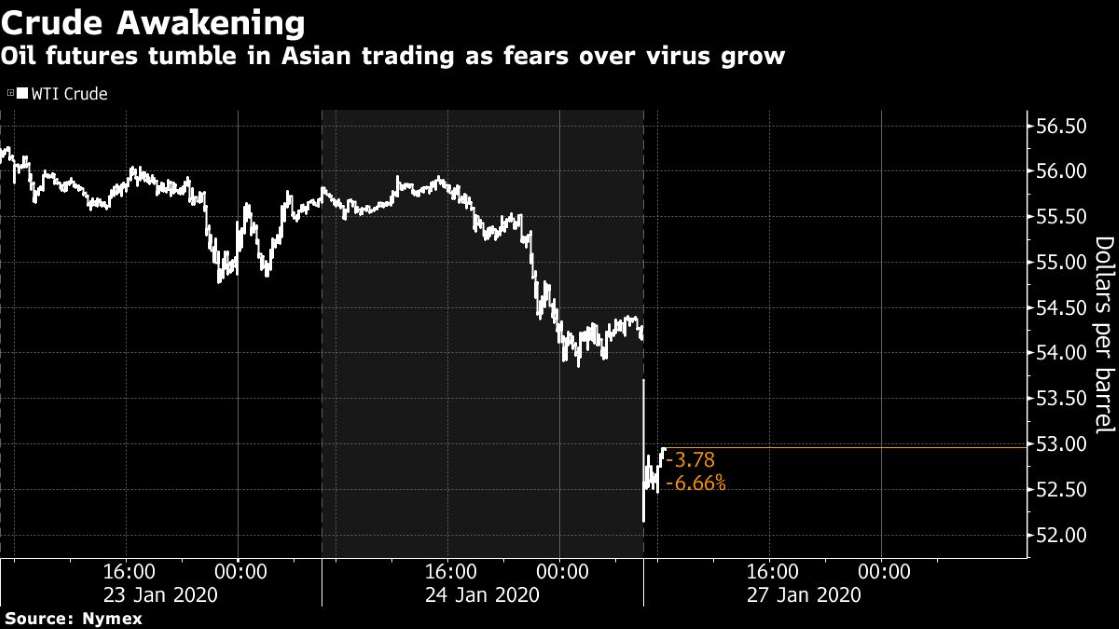 Futures in London and New York plunged more than 3% as the death toll and the number of infections rose, while officials extended the Lunar New Year holiday to help stem the spread of the outbreak. Goldman Sachs Group Inc. predicted that global oil demand may take a hit, but Saudi Arabia said it believes the crisis so far will have a “very limited impact” on consumption.

The virus is the latest upheaval for the oil market, which has been hit with turmoil in OPEC producers from the Middle East and North Africa. The market is also dealing with plentiful global crude supply, even as the Organization of Petroleum Exporting Countries and its allies trim output to prop up prices. Investors are selling crude amid a broad withdrawal from riskier assets and fears the virus will curtail fuel consumption as travel is restricted.

“This could be one of the most significant demand destruction events in history,” Phil Flynn, an analyst at Price Futures Group Inc., said by email. “The impact has to be in the hundreds of thousands of barrels of demand loss and counting. Fears of a fast spread will kill oil demand.”

Hedge funds boosted bullish bets on WTI by 2.8% in the week ended Jan. 21, the most in a month, a day before prices tipped into the worst three-day slump since September.

The sell-off could gather pace as Brent approaches levels at which some U.S. shale companies have hedged their oil prices for 2020. For example, Occidental Petroleum Corp. has hedged this year in a complex deal at a price equivalent to $55 a barrel. As prices approach that level, the Wall Street banks which sold Occidental the insurance may be forced to sell to offset their exposure.

Saudi Energy Minister Prince Abdulaziz bin Salman said the world’s largest oil exporter was closely monitoring the situation both for its impact on the Chinese economy and the oil market fundamentals. Yet, he said that the same “extreme pessimism” that’s afflicting the market also occurred in 2003 during SARS, “though it did not cause a significant reduction in oil demand”.

“The current impact on global markets, including oil and other commodities, is primarily driven by psychological factors and extremely negative expectations adopted by some market participants despite its very limited impact on global oil demand,” the prince said in a statement.

Global oil demand may slip by 260,000 barrels a day this year and could shave almost $3 from the price of a barrel of crude, Goldman Sachs said last week, using the 2003 SARS epidemic as a guide.

China extended the Lunar New Year holiday until Feb. 2 from Jan. 30, while companies in Shanghai have been asked not to start work until at least Feb. 9. There are more than 2,700 confirmed cases of infection in China so far and Canada confirmed its first case while the U.S. announced a fifth, as the virus spreads to at least 15 countries and territories. Visitors to Macau from China during Jan. 24-26 dropped about 66% from a year ago.

“The ultimate worst case scenario is getting priced into oil,” said Stephen Innes, chief market strategist at AxiCorp. “The move is exaggerated because there is lot of oil in the market at the moment. Fear is driving markets.” – Bloomberg