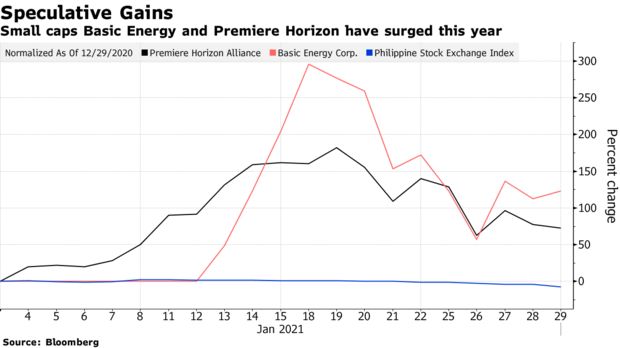 The Philippine Stock Exchange Index is down 7.4% so far this year, the biggest decline among 92 global equity benchmarks tracked by Bloomberg. That’s a dramatic turnaround after the gauge’s 22% surge in the three months ended December saw it ranked No. 16 for that period.

Faced with a decline in the nation’s biggest stocks amid an exodus of foreign investors and a weak economy, local individual traders are shifting to riskier plays, mirroring their global peers. U.S. retail investors have been piling cash into small caps, initial public offerings and options as the S&P 500 Index has treaded water so far in 2021.

Philippine small investors are fueling a surge in speculative stocks, flush with funds from last quarter and enabled by the growing power of internet trading platforms, according to Conrado Bate, president of COL Financial Group Inc., the nation’s biggest online stock broker.

Such trading strategies have led to some major volatility. Daily single-stock gains of at least 30% have been recorded 33 times in January, the most for any month since November 2011, according to data compiled by Bloomberg. Basic Energy Corp., a microcap oil explorer, accounts for five of those moves, with its shares more than doubling so far this year.

“We are seeing the rise of mass retail online investors,” said Bate, adding that 80% of COL’s new clients buy speculative stocks for a “quick buck.”

As in many markets around the world, low interest rates and the pandemic lockdown provided a big push for retail investing in the Philippines. COL’s number of new clients more than doubled in 2020.

Eleazar del Rosario, a 33-year-old part-time university lecturer, said he started investing in 2015 but only became active in March after taking a three-month tutorial in day trading. Working toward achieving “financial freedom,” his trades include speculative stocks that while fraught with risks “are really the big movers,” unlike blue chips.

Del Rosario said he doesn’t own stocks for long, often changing his holdings weekly or even daily.

Gains for tiny stocks are hit-or-miss, though the MSCI Philippines Small Cap Index is down 4.2% in 2021, outperforming the 7.9% loss in the index provider’s broader gauge for the country. Still, recent successes like Basic Energy and Premiere Horizon Alliance Corp. — a developer and miner whose shares have surged 73% to a market valuation of about $90 million — are making speculative trades too tempting to abandon.

“Addicted to their sharp gains from previous trades, many are looking for the next big one,” said Kevin Khoe, a former equities analyst who has been trading stocks since 1994. “We see more speculative plays happening simultaneously now because online trading is faster and it has created a wider investor base.”-Bloomberg