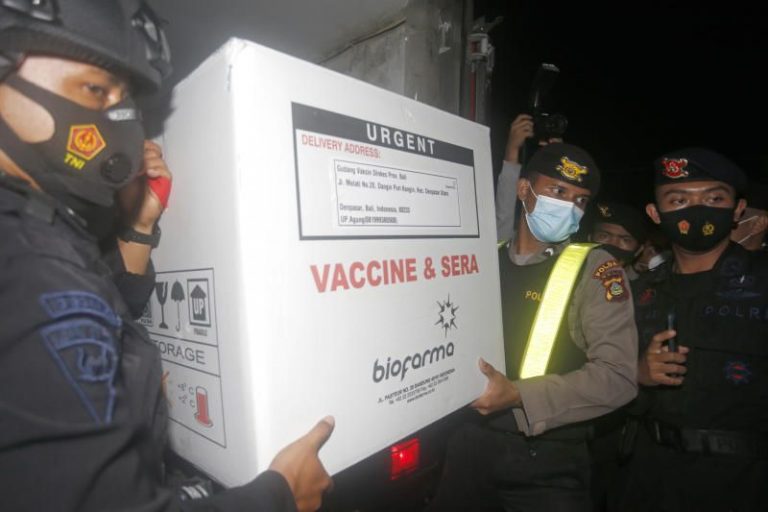 In this Jan. 5, 2021, file photo, Indonesian security officers carry a box containing coronavirus vaccines upon its arrival in Bali, Indonesia. Indonesia’s Food and Drug Authority on Monday, Jan. 11, 2021, green-lighted emergency use of the Covid-19 vaccine produced by China-based Sinovac Biotech Ltd., with vaccinations of high-risk groups expected to start later this week. – AP

Interim data from a late-stage human test of CoronaVac showed it is 65.3% effective, Indonesia’s food and drugs authority BPOM said – lower than figures in Brazil and Turkey which have yet to launch mass vaccinations.

“These results meet the requirements of the World Health Organisation of minimum efficacy of 50%, ” BPOM head Penny K. Lukito told a news conference.

President Joko Widodo is set to get his first dose tomorrow in a sign of the priority placed on immunisation in a country of 270 million people that has done far less than South-East Asian neighbours to contain the virus.

But some public health specialists question how effective the rollout will be given the limited number of doses available, logistical challenges across thousands of islands and scepticism over the vaccine.

A BPOM official said 25 infections were found to get the efficacy rate, but without giving further details.

Dale Fisher of the National University of Singapore told the Reuters Next conference yesterday that not releasing detailed data could be problematic for a fast rollout.

“Messaging is more important than ever, ” he said.

Indonesia has suffered more than 24,343 deaths from 836,700 cases. Over a tenth of deaths were in the last two weeks.

To start, only three million doses of CoronaVac will be available in Indonesia.

Some 1.2 million doses have been dispatched to 34 provinces, which span an area wider than the continental United States.

Indonesian authorities say they have also secured a total of nearly 330 million doses of vaccine from Sinovac and other companies for a campaign they expect to take 15 months to reach herd immunity once two-thirds of Indonesians are vaccinated.

Sinovac has been overseeing late-stage clinical trials in Indonesia along with local state-owned drugmaker Bio Farma.

Some 1.3 million frontline workers are due to be among the first to receive the vaccines.

But as it seeks to revive its economy, Indonesia then plans to prioritise younger workers rather than the vulnerable elderly as in many countries. — Reuters